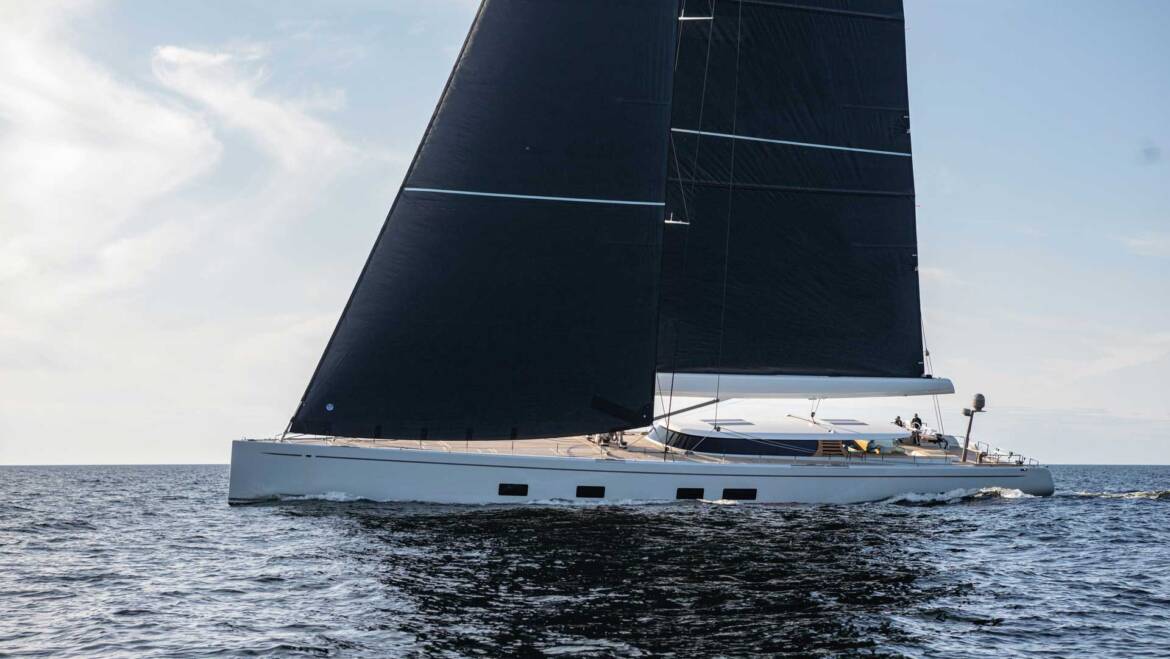 Creating the perfect blue-water sailing yacht is not a matter of chance. It requires a team of specialists working in harmony under the direction of a knowledgeable owner. Fortunately, Canova had such a team. Her owner, a passionate sailor with more than 42 years’ experience, had previously owned nine yachts from notable yards such as Baltic, Swan and Wally. He raced some, but pure cruising is his real love and he had hoped to circumnavigate in his previous Canova, a 35.78-metre Baltic.

“The first Canova was a great blue-water cruiser,” the owner explains, “but in reality it was a traditional semi-custom cruising yacht with little focus on performance, and difficult to sail short-handed. So I decided to start again with a new Canova, larger, with much better performance and focused entirely on blue-water cruising – nothing more.” By now, he knew exactly what he wanted: “Optimum seagoing comfort; easy maintenance in remote areas; lots of shade in the cockpit; tenders stowed below decks, and the best possible interior layout and, initially, a lot more half-formed ideas also!”

The owner hired a young Italian designer, Giuseppe Martines, to work all these ideas into a preliminary design, which “really showed us what we needed, and it turned out to be quite close to where we finished up but it picked up some game-changing ideas on the way”. Armed with this outline, he approached Baltic to develop the mechanical and engineering package.

As the preliminary design for this ultra-fast carbon-hulled cruiser progressed, one unusual innovation was proposed – the Dynamic Stability System (DSS). This novel solution uses a sub-waterline hydrodynamic foil, horizontally deployed to leeward to create lift, which complements the righting moment of the keel. This reduces the yacht’s angle of heel, making both hull and sails more efficient and increasing speed. Pitching is also much reduced, adding to sail efficiency and comfort.

Six months down the road, five leading naval architects were asked to outline their proposals and evaluate how the DSS foil could be integrated into their design. Farr Yacht Design was the ultimate winner, and after undertaking detailed studies to compare DSS with other options, including canting, fixed and telescopic keels, the owner selected a DSS foil in combination with a lifting keel incorporating a trim tab on the basis of performance, reliability and comfort.

While the DSS system used on smaller yachts was manually operated and relatively simple, scaling it up to superyacht use was a different matter. The righting moment generated by Canova’s foil was calculated to reach a maximum of 140 tonnes/metre, so it was clear that some challenging engineering issues would need to be addressed, alongside careful design work to shoehorn it into the hull without impacting on the accommodation or technical systems.

To this end, BAR Technologies, the engineering team of the British America’s Cup challenge, composite engineering firm Gurit, and French carbon-composite foil builder Isotop were added to the team. Already on board were Baltic, Hugh Welbourn, inventor of the DSS, and Gordon Kay, owner of Infiniti Yachts, whose Infiniti 36 was the first yacht to carry a DSS foil. Together, they developed a self-contained “cassette” running across the yacht’s midships, within which a nine-metre-long foil could be extended to port or starboard powered by captive winches. As this was located just forward of the engine room and directly beneath the master cabin, there was initial concern about noise beneath the owner’s bed, “but now, having sailed many miles, my fears have been allayed”, he says.

With the foil and appendage decisions now made, design work progressed – and more novel solutions proposed to fulfil the brief for the most comfortable blue-water yacht possible, including a low-emission, diesel-electric propulsion and electrical power system.

After a three-year build, ably project-managed by Canova’s captain, Mattia Belleri, the yacht started a voyage to the Mediterranean in late 2019 before Finland’s winter ice locked her in, stopping in Amsterdam for some final adjustments to her rig. The route to Genoa was a challenging one for a maiden voyage and, despite being sailed conservatively, Canova still managed a fast average speed, at one stage hitting just over 25 knots.

Fast-forward to a windless day in February, where I join the yacht at Italy’s Porto Venere not far from La Spezia. First impressions are of a seriously attractive yacht, with such well-balanced proportions that it is difficult to assess her size from a distance. But after boarding easily over her open stern platform from her seven-metre limo tender, the long view forward down wide side decks, past her deckhouse to her flush foredeck, makes it clear that this is a large and powerful 43-metre.

“Safe and easy to sail short-handed” was an owner requirement and there are many manifestations of this. For example, her fully instrumented helm stations are positioned close to the bulwarks for excellent forward visibility; the mainsheet track is set out of harm’s way on the coachroof, well-distanced from guests and crew; and a self-tacking jib is sheeted forward of the mast to avoid flailing sheets sweeping the side decks. “The sails had to be easy to handle,” explains Belleri. “Working with Farr and North Sails, we developed a ‘solo round-the-world’ sailplan, with the jib furled on one fixed stay and another four sails, ranging from A3 to storm-jib, removable. As for stowage, the storm-jib has its own locker, while the other three sails alternate on two huge drums set in lockers beneath the foredeck, from where their tacks are transferred to the bow with a clever gadget that allows total control. Different from most Code Zero sails, our large quadrilateral sail can be kept on its stay in any weather”.

The whole rig – all carbon – was also chosen for ease of use, with the square-top 3Di main from North Sails reefed on to a mandrel. To achieve a better sail shape and minimise wear, the ability to tension the foot at the reefing points was considered essential. “Rondal’s proven, simple-to-operate claw system that either locks into the clew or to the reefing points combined with the monolithic mast construction were… the driving factors in our choice of rig,” says the captain.

How does it all come together in practice? When Canova crossed the Bay of Biscay in January, the captain says the DSS foil “reduced heeling by up to 40 per cent as Canova surfed in 25 knots of true wind, with the helmsman remaining in complete control”. Later, when we sail in 22 to 25 knots of breeze in 2.5-metre seas off Corsica, Canova gives us an equally thrilling ride, broad-reaching under full sail at over 20 knots with foil extended and a mere 10-degree angle of heel. I feel at ease on the helm, with the manual steering fingertip-light.

As one might expect from a project as well conceived as this, the layout of the yacht’s living spaces also borders on perfection. Interior designer Lucio Micheletti achieved elegance and traditional seagoing simplicity (see the following page for his profile sketch). The transition from exterior to interior is seamless, with the cockpit, sheltered by the extension of the coachroof and on either side by opening glass panels, sitting on the same level as the main saloon.

On the lower deck, the master cabin lies at the centre of the yacht where the motion is minimal, while the bed can be adjusted to counteract the angle of heel. Forward are two guest cabins – a double in the bow and a twin to starboard – while a third cabin can be created by amalgamating the owner’s study with a guest sitting area.

Logically, the galley and four crew cabins occupy the stern of the yacht, concentrating them close to the yacht’s vitals – the engine room and navigation station, from where a companionway rises to the aft deck between the helm stations. But the magic of the layout lies in items that are not so obvious. The lifting keel, for instance, is concealed between the master bathroom and the main stairway, while the owner’s tender, an HTM seven-metre which can carry a 1,000-litre fuel-bladder to refuel Canova, lies in a garage shoehorned between the foredeck and the guest cabins below. The crew tender, a 4.6-metre Aermarine RIB is stored athwartships in the stern beneath another large hatch. Equally concealed, and chosen for its simplicity and performance, the anchoring system offers two ploughshare anchors deployed through the bottom of the hull just aft of the bow.

Ease of maintenance is a key requirement for a cruising yacht visiting remote destinations, so it was important that Canova could be serviced without being lifted out. She was therefore designed to dry out without damage, sitting on a suitably strengthened keel that takes the yacht’s entire weight. At the same time, every underwater component can be serviced with the yacht afloat. For instance, the drop-down bow thruster is a “plug-and-play” device, readily removable. What with this, the minimal running hours needed for her generators and the bunkering using a bladder in the tender – the yacht is an engineer’s dream.

Canova seems to have everything that a cruising sailor would desire and, surely, her technology and systems represent the future for sailing superyachts. She’s also extraordinarily well built, with a highly practical deck and interior layout, and reduced angle of heel and pitching while under sail, thanks to her DSS foil. Add to this her highly efficient propulsion and electrical system, and she surely sets an example to follow. Is she the perfect state-of-the-art blue-water sailing yacht? If not, she’s as close as anyone has ever managed to get.

Canova is fitted with a special low-emission, diesel-electric propulsion and electrical power system. At its heart are two Cummins-powered 224kW custom generators that supply a remarkably quiet 420kW electric motor (pictured left) that powers a Hundested saildrive propulsion unit. This unit’s forward-facing propeller can rotate 170 degrees in either direction, thus doubling as a stern thruster. Whatever the power requirement for the electric motor, the boxed Cummins powered generator sets (below left) run at their most efficient revolutions, with any spare capacity diverted to charge the yacht’s huge 245kW bank of lithium-ion cells. These batteries, from which the yacht’s entire electrical demand is drawn, can be fully charged directly from the generators in less than two hours or, when under sail, can be charged using the electric motor working in reverse as a hydro-generator, silently topping them up for a speed loss of less than one knot. To minimise power loss, the yacht uses a high-voltage 750V DC system that, working through a series of water-cooled inverters, provides power to satisfy the majority of the yacht’s demand. Only the ram tensioners, lifting keel and furlers use hydraulic power from a 65kW pump unit. “I have nine hours of silent running with all the services in operation, including air conditioning, ventilation and our walk-in refrigerator,” says her owner, “and the two-hour charging time means I only run a generator for a maximum of six hours a day.”