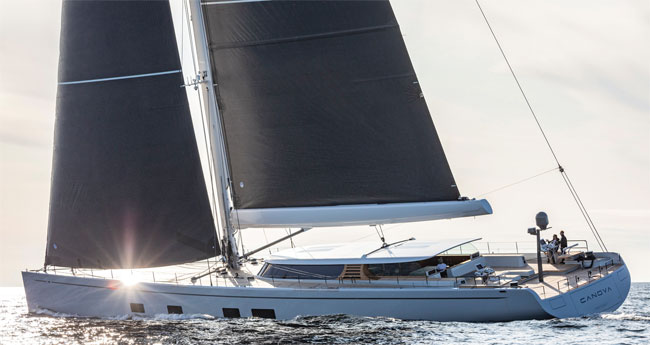 Redefining the concept of a superyacht – the introduction of Dynamic Stability System (DSS), Cl Ellipse rigging from Carbo-Link and spars from Rondal – and suddenly life’s even more full-on

When Baltic Yachts set out to build the world’s first DSS-foiling superyacht for a visionary client, it was a journey into the unknown. DSS had never been used on a yacht of anywhere near this size, or power. With a host of complex engineering challenges to overcome, the owner’s project manager Mattia Belleri of Fluidsailing and Baltic’s project team assembled a world class design loop including Farr Yacht Design, Infiniti Yachts, Lucio Micheletti, Gurit, BAR Technologies, Isotop, North Sails, Rondal and Carbo-Link.

The yacht had to be fast and supremely comfortable but also safe, responsive and easy to sail, even with a short-handed crew in the Southern Ocean – but the client’s brief set no defined boundaries. Instead the design team was directed to seriously consider every possible option to achieve the owner’s vision.

The resulting yacht, the Baltic 142 Canova, is a genuine game-changer in terms of both performance and comfort. Aptly described in a recent issue of Seahorse as “a full-scale expedition into the future”, it fundamentally redefines the concept of the high-performance sailing superyacht for years to come.

Carbo-Link and Rondal were selected to deliver Canova’s full-carbon rig package on the strength of their previous collaborations, which include iconic superyachts such as Ngoni, Aquarius, Badis and the second-largest yacht built by Baltic to date, the 53.9m (177ft) Pink Gin, whose 68m sloop rig is a full 16m taller than a J Class.

Canova’s nine-metre transverse sliding DSS foil is designed to achieve a big reduction in heel angle and pitching motion to deliver a more comfortable ride, while effectively reducing the yacht’s displacement by 15 to 20 per cent and boosting its performance. The foil is still being sea-trialed at the time of writing but a case study published by Gurit predicts that it will generate more than 40 tonnes of steady state lift and a peak dynamic lift of well over 60 tonnes.

The brunt of these additional loads are borne by the rig, so Baltic’s project management team, Farr Yacht Design, Infiniti Yachts, North Sails, and Gurit worked closely with Rondal and Carbo-Link to define the load cases and rig layout. To avoid over-specifying rigging components and structures, they had to consider the yacht’s speed-dependent, dynamic righting moment and make an accurate assessment of real-life operational constraints, drawing on their combined experience in engineering grand prix rigs.

A further consideration was the owner’s requirement for the yacht to be self-sufficient in remote cruising grounds and for its rig to handle all types of use. Unlike most superyachts, which rely on a large shore crew and spend several days in a marina transitioning the rig between performance and delivery modes, this had to be done on the fly with a short-handed crew, quickly and in any location.

Managing weight was crucial, due to the knock-on effect of any extra weight on the effectiveness of the DSS foil. ‘Working with Farr, North Sails and Baltic Yachts, we presented a wide range of different load cases to determine optimum sailplans and rig setup across numerous modes,’ Rondal’s Friso Hylkema explains, ‘and that in turn defined the rig and rigging loads.’

‘Because of the DSS system, the rig is designed and built based on 30 per cent of additional righting moment,’ Hylkema says . ‘Using advanced computer software such as FSI (Fluid Structure Interactions) which calculates interactions between spars, standing rigging and sails until it finds an optimised equilibrium, dozens of rig and sails variations, trim settings and sailing scenarios were validated. There was a lot of interaction between Rondal, Carbo-Link and North Sails.’

‘The primary variable is mast stability, driven by local and global buckling,’ says Rondal’s sail handling engineer Edoardo Volpe. Rondal optimises the stability of the mast by engineering the section’s size, shape, optimised layout and also by controlling the stiffness properties of the laminate including fibre type and direction. This fulfils the structural stability requirements, keeping the weight low while also complying with classification. Mast tune is the end result consideration throughout the process and the crucial secondary variable is strength.’

One of Rondal’s strong suits is its OOA (Out Of Autoclave) pre-preg manufacturing process – no other company can produce a superyacht mast of 60 metres (or considerably longer) in one piece with no joins, rivets or seams. Rondal’s methodology allows for full length, uninterrupted laminates to be applied with optimised fibre architecture from mast foot to mast head, resulting in consistent, harmonious thickness and strength without the compromise and additional weight of section joining. OOA manufacturing also achieves void content of less than two per cent.

The internal tangs anchoring the mast to its stays were a collaboration between Rondal and Carbo-Link. It’s a neat solution with no threaded fittings and ensures efficient load transfer between rigging and mast. The shimmed tuning process allows for adjustment ranging from 100 to 150mm. Threaded fittings are often the weakest part in the mast and rigging configuration, and if any thread is damaged, the risk for rigging and mast interface replacement is high.

Canova’s custom-designed solid carbon rigging package from Carbo-Link includes CL Ellipse laterals with aerodynamic profiles optimised for broader wind angles; a CL Torque forestay that furls in both directions with 99 per cent torsional efficiency; and CL Hybrid runners that are solid carbon for most of their length with flexible carbon sections at the boom interface and at the upper and lower deflector locations. Most of the tuning is done at the diagonals with internal tangs monitored by built-in fibre optics. Load pins are used for secondary analysis and calibration.
To optimise the yacht’s performance while keeping the sail-handling as simple as possible, a joint study between the owner’s project manager Mattia Belleri and Rondal implemented some racederived custom solutions. ‘To accommodate the huge square-top mainsail in tacks and gybes, we created a backstay crane with a smart system of running backstays and deflectors,’ Hylkema says. ‘This makes tacking and gybing quick and easy with a short-handed crew, also in reefed conditions, as the deflectors function as checkstays, but it’s more effective as the deflectors pull back laterally instead of downward as checkstays do. The runner becomes a fixed backstay and the deflectors help control mast bend and stability. This system was optimised for the first reef setting as the main tacks underneath the first deflector. At third reef the main tacks underneath the lower deflector. This system simplifies sail handling especially in heavy conditions.’

‘Carbo-Link’s solid carbon CL Ellipse rigging package for Canova uses cutting-edge technologies recently proven on Imoca 60s, Maxi 72s and Wallycentos,’ says James Wilkinson of Carbo-Link. ‘For this yacht, the aspect ratio of the CL Ellipse laterals is reduced to better suit broader wind angles. Carbo- Link’s toughened resin system, with ultra-low friction and a very high resistance to both impact and chafe, is a major bonus given that Canova’s sail inventory includes a quadrilateral jib with two sheets on each side, doubling the amount of contact with the lateral rigging.’

Canova has shimmed V1 chainplates with tidy, below-deck terminations. The shims account for chainplate and cable length tolerances, plus tuning adjustments if required. The majority of tuning is done at the diagonals with internal tangs, including the cap shrouds. The V1 and D1 shrouds have integral fibre optics to monitor tuning, with load pins for secondary data analysis and calibration. The primary jib furls around a Carbo-Link CL Torque forestay – also used on yachts such as Saudade and Win Win – rather than a headfoil. Not only does this reduce weight, but also drag as its sectional size is much smaller. The forestay has unidirectional carbon at its core for optimum tensile strength, encased in +/-45° fibres for torsional strength and stiffness and all consolidated into a solid cable.

To control the mast and sail shape, Canova uses Carbo-Link’s CL Hybrid running backstays: solid carbon with flexible carbon sections where necessary. This allows the smallest diameter and toughest cable whilst allowing the cable to flex. ‘There are flexible sections at the boom interface to allow cable manipulation when required,’ Wilkinson says. ‘And also flexible sections on the upper and lower deflector locations, which enable greater scope for mast tuning and refinement through various sail configurations.’

As –’s sea trials near completion, the best testimonial for the rigging package delivered by Rondal and Carbo-Link is the fact that they’ve already started their next project with Baltic Yachts: rigging the Baltic 145 that’s currently in build and due to launch spring 2021.