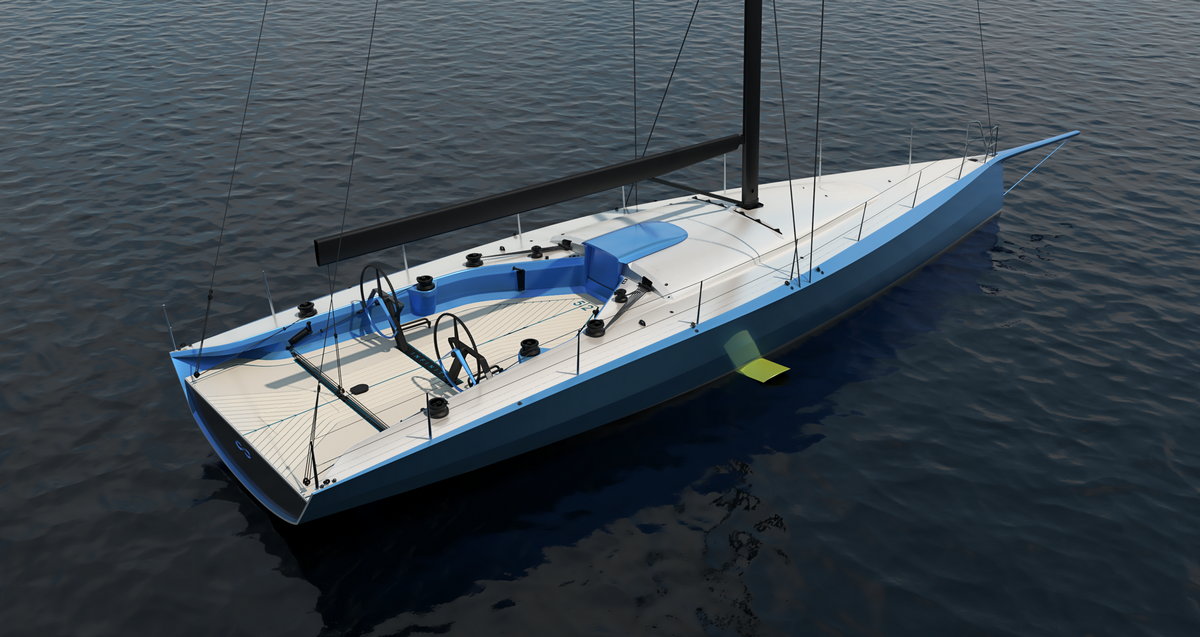 Land the plane, sink the putt or simply shoot to score – eventually the design process ends, or it is supposed to. Months of work and years of experience begin to take form as a physical entity. There is an interesting transition when committing to something, however small, in the design of a yacht. It is almost impossible for a single element of the design not to have a consequence within the remainder of the process. Of course, at an elemental level, everything weighs something; we have not managed to deal with that particular problem yet. However, in conjunction with the excitement and emotional energy that comes with taking plans and ideas to reality, is the knowledge that you have had to earn the trust and confidence of the end user. This sounds simple, but it goes far beyond basic economics of buyer and seller – this is a journey which ultimately places one half of the deal on a modestly sized, high performance sailing yacht, travelling at speeds hitherto within the reach of very few people, far, far from land.

It is also a journey of philosophy. Why does someone buy your yacht? Looks? Colour? Style? Fashion? Good or bad advice? The answer is actually deeper than that. They buy it because they believe in what you do. They trust in your approach, your philosophy, your beliefs. They take note of your successes but that is the past, we are dealing with the future here. They buy because they believe.

This sounds simple, but when you bring what is still, in spite of the past 15 years of nailing every test in front of us, new technology to the market wrapped into a new product, you still have many hurdles to climb. This is never going to be a cookie cutter, racer/cruiser, stereotypical yacht. It is an Infiniti Yacht. From the very outset, it is designed to use foils. It is not a yacht modified to adapt to foils, or indeed, something that looks like foils might help, it is a yacht, designed around a proven technology with an unparalleled breadth of experience.

Your clients need to “get” what you are setting out to do. They need to understand this is not treading water, this is breaking new ground and attaining new experiences, this is the excitement of discovery, this is leading not following.

The pressure is certainly on when making decisions and landing the plane for what in some parts of the yacht will be the last time. The key driver in the design process, naval architect Hugh Welbourn has been at the forefront of monohull foiling for the past 20 years, inventing DSS and slowly watching the world wake up – the Infiniti 52 will be his 15th yacht design using DSS , not including retrofits and collaborations and that means there is a serious body of work and unmatched experience in different foiling developments behind the Infiniti 52. Coupled with the technical capabilities of Stu Banntatyne, as cruel a taskmaster as ever, cracking a performance whip, and with the Volvo-winning and America’s Cup credentials of Brian MacInnes driving the construction, this is shaping up to be something pretty special. Taking this approach with the design and build, encompassing so many skill sets and experiences is a far cry from the ‘sole trader’ approach that does not embrace team creativity, unless of course it is their own.

With the rule changes under IRC and ORR the bar is pretty much set if you would like to use foils and have good all round performance in a wide range of courses and conditions. The pretty pictures of the next super/ flying IRC coastal/offshore racer that float around the internet are under the current rules a far cry from what is actually going to get a rating let alone compete. While it is interesting to consider that one day all yachts will fly, as oft quoted, reality (frightening word that) and rules mean that for the mainstream IRC/ORC/ORR events foil usage hinges on being smart about how you use them.

All of these variants drive the performance ambitions of the design but a few things remain constant in naval architecture and adopting new technology. Reducing headstay sag without increasing rig weight, that is a win. Having fewer sails but with wider ranges, meaning less changes, less weight and more gears: that is a win. Having a smaller crew than the average IRC 40 on a 52ft yacht: that is a win, at least in enjoyment terms but not yet under IRC…

The sails alone, from Doyle New Zealand, have been a key driver of the design. Sharing a passion for innovation and not accepting the status quo as anything other than a dated rock band of dubious value, Doyle have been elemental in the design of the Infiniti 52. By taking full advantage – in every area of the yacht – of the reduced loads in the structured luff mainsail, headsails and code sails, the Infiniti 52 has managed to match the displacements of comparable yachts, notwithstanding the push button systems and 4.5 metre DSS foil secreted below.

Combining the key elements of this process, working with partners at Gurit, Composite Builders, AES, Doyle Sails, Harken, Isotop, Design Unlimited, New Zealand Rigging, Carbo-Link, Future Fibres, Symmetrix and Waypoint Racing is like herding some very smart cats and ensuring that at the end of the day, the passion and energy and the willingness to change the way people see sailing is harnessed in a manner that ultimately creates the Infiniti 52.

A one-off, of course, is slightly different, developed for one owner, perhaps with ideas that have to be managed ever so carefully, but the Infiniti 52 is a yacht that is developed for the market and with two already sold and launching in the summer of 2021 there is another level of scrutiny that comes with setting your stall out so firmly in a market that for years has been dominated by one class. This takes us back to trust and belief and how clients see what we bring to the table. A passion not for subtle refinements on an existing theme, but a completely fresh look at the genre and to understand what makes people want to go sailing, and almost more importantly what stops them.

Of course, foils are sexy and very fashionable today, and very welcome… It has taken a while. But when you think that a set of Imoca 60 foils cost more than the DSS foil on the award-winning 142ft Canova, you have to question who made the smartest decision. Simply put, in a cost versus benefit ratio, we know where we stand and when you take into consideration the rules and ratings, and understand how they work, then the choices are clear.

As the relevant rules stand today, IRC has priority for this project, and their – allegedly interim – foil restrictions have not affected the design, and indeed would appear to have been formulated to match the Infiniti 52 foil parameters.

It’s important to emphasise that having foils that are too big can be just as detrimental to a balanced performance/rating configuration as those that are too small, and as ever it is a fine line in combining all the sometimes conflicting requirements into an effective package.

As the first of the Infiniti 52s comes together at Composite Builders, USA, it is hard not to start thinking ahead to launch day and the first offshore experiences for the new owner and his team. Seeing thousands of hours of energy, hard work, passion, design and free thinking manifest itself in the final design has to be one of the most satisfying moments one can have.

It is not about the dollars and cents (unfortunately), but about doing something different, and not settling for the norm, but change for the sake of innovation and real progress rather than a vanity project with some funky shapes that will be out of date in a few weeks even if it can get out of its own way. It is really combining the passions of the design and the build teams and harnessing the energy of the clients and their teams that creates something truly special. This has always been Infiniti Yachts’ vision, to raise the bar, not inch by inch but in leaps and bounds and the Infiniti 52 is just the next step in that journey.

This industry survives, by the skin of its teeth, on passion. It is this passion for innovation, true innovation, that has driven Infiniti to exist and it is with the partners and clients they have worked with from the smallest 10ft foiling yachts to the Superyacht of the Year, the 142ft Canova, that they find the passion.

For the full article, visit seahorsemagazine.com