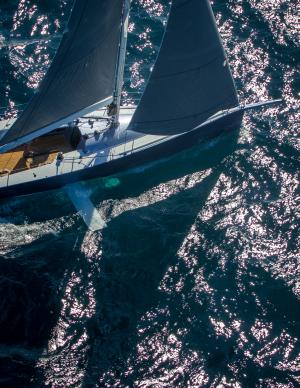 The adoption of foils in the 34th America’s Cup transformed the event. It’s hard to imagine anything more captivating than high-speed 72 footers racing at close quarters while literally ‘flying’. So how can you make your own sailing more exhilarating? Even going half that speed would satisfy most, but unless you’re agile enough for a Moth, or have the space or money for a multihull, what options are left?

DSS (Dynamic Stability Systems), could be how more of us start ‘foiling’. It’s currently the best way to use foils for speed gain in conventional monohulls. The lateral wing is deployed to leeward, generating lift which increases righting moment while partially lifting the yacht. As the speed goes up, so does the stability, meanwhile drag is dropping as there is less hull in the water. It’s a perpetual speed/fun increase and can feel like a fast multihull at times.
DSS is something most people will doubt until they try it, but as more experience the technology, it’s now appearing less experimental and more like a very effective way to increase speed while achieving a smoother ride.
Stability from speed, not weight
Three years ago I wrote a feature on DSS for this magazine following a quick blast on the 27ft prototype. That sail was enough to convince me of its potential but I left wanting to feel it all scaled up.