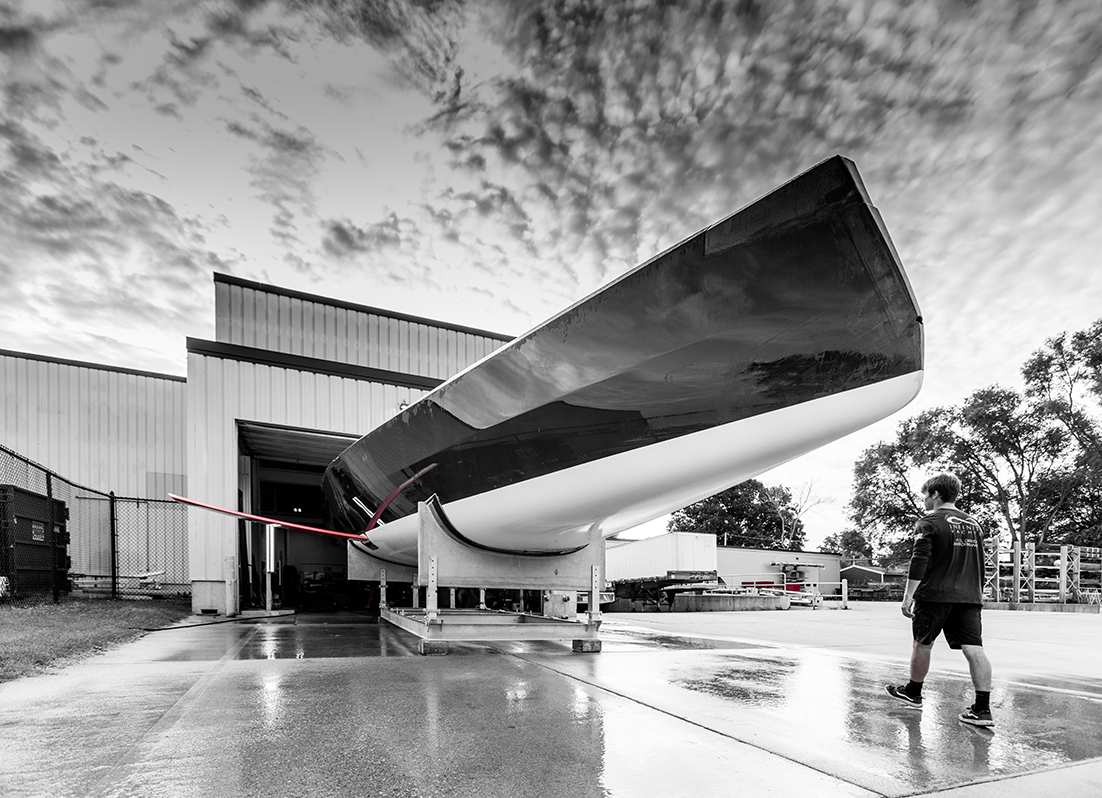 When Gordon Kay sought a manufacturer to build a new model of performance sailing yachts, he initially didn’t even consider the U.S. as a destination for production.

“If you told me two years ago that we would be making composite yachts in Michigan, I would have laughed at you,” said Kay, founder and project manager of Infiniti Yachts, a small yacht builder based in Gibraltar in the south of Spain that focuses solely on performance sailing yachts. “But, actually, it couldn’t have gone better.”

Despite initially scoffing at the idea of running production in America, Kay and Infiniti Yachts eventually connected with Holland-based manufacturer Composite Builders LLC, striking a partnership to produce Infiniti’s latest creation: the Infiniti 52.

Hydrofoils are typically used on sailyachts, and when the yacht increases in speed, the foils allow the vessel to lift out of the water, reducing drag and increasing speed.

Composite Builders and Infiniti Yachts unveiled the first Infiniti 52 in August, giving the market its first glimpse of what Kay considered to be a groundbreaking design. The yacht was then shipped to the U.K. where it will undergo sea trials.

Composite Builders is currently working on the second Infiniti 52 yacht, which can now harness some of the proficiencies gained through the first build. So far, Infiniti has sold two yachts based on the plans alone. Kay has set a goal of selling around six yachts total, but he expects to eclipse that mark based on the initial interest.

Kay’s initial dismissal of Holland as a hub for production on the Infiniti 52 had nothing to do with his perception of Composite Builders and the company’s work. In the sailing community, only one U.S. location has been deemed a worthy destination for production.

“I think there is a perception in the United States that, unless you come from (Newport), Rhode Island, you can’t build yachts — that it’s just not possible,” Kay said. “But it’s a very strongly held perception that if it’s not made in Newport, it can’t be any good.”

“When that yacht came out of the shed (in Holland), it was like a collective ‘Oh, f***, they really did it!’” Kay added.

Kay’s partnership with Composite Builders was hardly by accident. Composite Builders founder and CEO Brian MacInnes has logged a long and fruitful career in the sport of sailing and connected with Kay on the Infiniti 52 project through a mutual friend.

Originally from Nova Scotia, MacInnes came to West Michigan in the early 1990s to run a racing team, always aspiring to get involved with the America’s Cup, an international yachting competition that dates back to 1851.

Around 2000, MacInnes was able to make the America’s Cup his full-time job. He logged a 13-year career that included sailing with six different cup teams and traveled around the world.

When he took a step back from the sport, MacInnes and his wife, Danielle, chose West Michigan as their new home. At the time, the composites industry was taking off — not just in yachting, but also in aerospace, automotive and other industries.

Having experience with composites in yachting, MacInnes in 2014 established Composite Builders from a 2,000-square-foot facility.

“We’re always interested in cool and exciting projects,” MacInnes said. “We dabble in aerospace and foil-powered yachts. But when Gordon approached us, and I had already seen how foils operated in his previous yachts, I was immediately on board with it.”

Composite Builders does build yachts for other companies, but it is typically quite selective when taking on new projects.

Despite perceptions from the sailing community, West Michigan has been a conducive location for yacht manufacturing. MacInnes pointed to the fact that West Michigan is home to manufacturers that supply Composite Builders with needed parts, and that it’s relatively easy to ship yachts to either coast.

But like many other manufacturers in West Michigan and beyond, Composite Builders is grappling with some of the more common industry problems, like workforce shortages.

“West Michigan has a very tight workforce — we’ve had to reach outside of West Michigan to help bring people in,” MacInnes said. “Gordon has helped in bringing people from overseas. It is a speciality workforce, but not that people can’t be trained. So we’re looking for locals to come to us.”

While the giant yachts are most prominent in its facility, Composite Builders specializes in working with a variety of other industries.

For example, the company designed hundreds of parts for a rocket that was developed and recently launched by Texas-based Firefly Aerospace.

The Holland company also designed a bike for American paracyclist Oksana Masters, who used it to win two gold medals recently at the Tokyo 2020 Paralympic Games.

“We generally focus on prototype work to pre-production runs,” said Matt Lepard, Composite Builders’ chief financial officer and general manager. “Making 50 to 100 parts would be a lot. We tend to help people launch off the ground.”

Still, in the sailing segment of its business, Composite Builders has seen a significant bump in demand because of the COVID-19 pandemic.

“We’ve been approached by several people that are at capacity at their own facilities over in Europe or other places, and want us to build the yachts,” Lepard said. “In certain cases, we’ve said no. But, there is no question about it, the desire to get out and recreate has gone up substantially.”