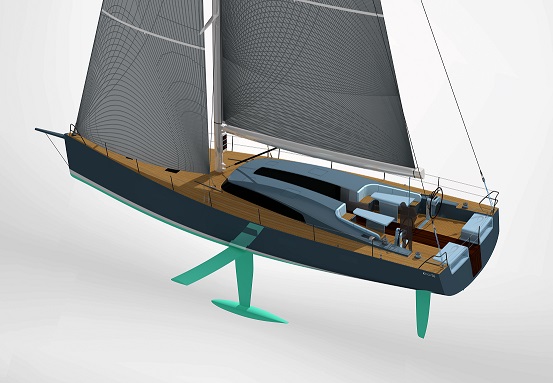 Infiniti Performance Yachts has announced the Infiniti 56C designed by Farr Yacht Design, the first performance blue water cruiser in the market which will reap the benefits of Dynamic Stability Systems foils. Following its success in the racing world and recent acceptance in the superyacht market it is now available for performance cruising.

“The Infiniti 56C redefines the performance cruising market,” said Britton Ward, vice president and senior naval architect at Farr Yacht Design. “We have designed a stylish, modern yacht, with a deck and interior arrangement equally suited to offshore passage making as well as entertaining at anchor.”
Thanks to the added righting moment and lift provided by the retractable DSS foil, the yacht will be capable of high average speeds, resulting in significantly shorter passage times. This is true in all conditions: in stronger winds, the faster the yacht goes, the more lift and righting moment the DSS foil provides. In lighter winds the foil is simply retracted, leaving a clean, easily-driven hull shape. Motoring hours will be reduced as the yacht will sail far more effectively in light winds compared to a ‘normal’ cruising yacht. The overall effect of this increase in performance means that the passage time for the Atlantic Rally for Cruisers, for example, could be as little as nine to 10 days, some 20-30{7ab277620c5331e8b7880e6f86cbb80254c5854d4a7043b2f5807dffb54e9218} faster than a comparable performance cruiser without DSS.

The DSS foil, deployed to leeward, creates vertical lift which, thanks to the design of the foil, increases with yacht speed (hence the ‘D’ in DSS), providing more righting moment and reducing the heel by as much as 10-12 degrees.
Ward also notes that there are additional benefits of DSS. “It not only provides increased righting moment and reduced displacement, but it allows the yacht to sail at significantly lower heel angles and with reduced pitching motion compared to anything else in class.” Less pitching and less heeling help create a more comfortable, more enjoyable, less stressful ride on board a cruising yacht. “DSS provides significant advantages, not just in grand-prix level racing, but also for the performance-focused cruising sailor,” said Ward.
Gordon Kay, CEO of Infiniti Yachts commented: “We are firmly in the age of foil-assisted sailing. While foiling multihulls have received much attention, performance advancements through the use and refinements of foils on monohulls have proved equally dramatic in the offshore racing world. The benefits of fitting DSS foils are now set to be felt in other areas of the sailing world. In particular, DSS and the Infiniti 56C will redefine the way people go blue water cruising.”
A single transverse DSS foil will be fitted to the Infiniti 56C. The foil is driven by an electric motor and its operation is by push-button from the cockpit, within easy reach of the crew, complete with manual back up.
Beyond the benefits provided by DSS, the Infiniti 56C is a stylish and intelligent blue water cruiser. It features a modern, low drag hull form, coupled with a modern deck saloon. The well-appointed interior integrates seamlessly with the cockpit, sailing and entertaining spaces. Three double cabins, all with en-suite head compartments and generous storage space, provide an exceptional level of comfort.

Design Unlimited applied its wealth of experience from the custom superyacht field to the interior of the Infiniti 56C, which will be constructed using lightweight technology to minimise the impact of the interior on the yacht’s performance.
A further benefit of the DSS foil is that it allows maximum beam to extend fully aft so interior volume can be optimised thus giving excellent scope for accommodation. It also allows for a fully functioning galley to be located forward which is perfectly usable at sea. This in turn allows for a large open-plan saloon directly aft which is class-leading for a yacht of this size.
The yacht will be available with various options of interior decoration and style. Each owner will have the opportunity to discuss their required interior directly with the Design Unlimited team to ensure total individualisation of their yacht.
The Infiniti 56C is available with an optional lifting keel. Lowering the keel to its maximum draft of 4m enables a smaller, lower drag bulb to be fitted, resulting in a lighter displacement under sail with extra stability provided when it is required by the DSS foil. Raising the keel reduces the draft to just 2.5m making for easy access to port or shallow anchorages. The yacht features twin rudders providing a well-balanced helm, easily driven by an autopilot in all conditions.
Importantly, the Infiniti 56C has designed from the outset around the foil, to make the most of the benefits on offer from the DSS system – DSS-approved foils remain the sole foil solution with a 100{7ab277620c5331e8b7880e6f86cbb80254c5854d4a7043b2f5807dffb54e9218} safety and reliability record.
To learn more about the Infiniti 56C contact Infiniti Performance Yachts or Farr Yacht Design.