Daylight appears beneath the prototype Quant23’s hull. Photo ©: Michael Aeppli / QuantBoats
Dynamic Stability System (DSS) is pleased to unveil the Quant23, which after its first preliminary sea trials in Cowes last week has proved itself to be one of its first – if not THE first – fully foiling keel yacht.
Designer Hugh Welbourn has spent more than 10 years developing the patented DSS, which comprises a retractable hydrofoil that is deployed to leeward on a yacht. The foil provides vertical lift to leeward, improving the yacht’s righting moment, an effect similar to having extra crew on the weather rail or a bigger keel bulb, and in turn dramatically increases performance. DSS foils feature on a wide range of racing yachts such as multiple Rolex Sydney Hobart winner, Wild Oats XI, to the high performance Infiniti range of racers and cruiser races to sportsyachts, Minis plus all manner of craft between.
However the very latest DSS foils not only provide righting moment, but extra vertical lift beneath the yacht too, which, in combination with a T-foil rudder, enables the Quant23 to sail fully airborne. 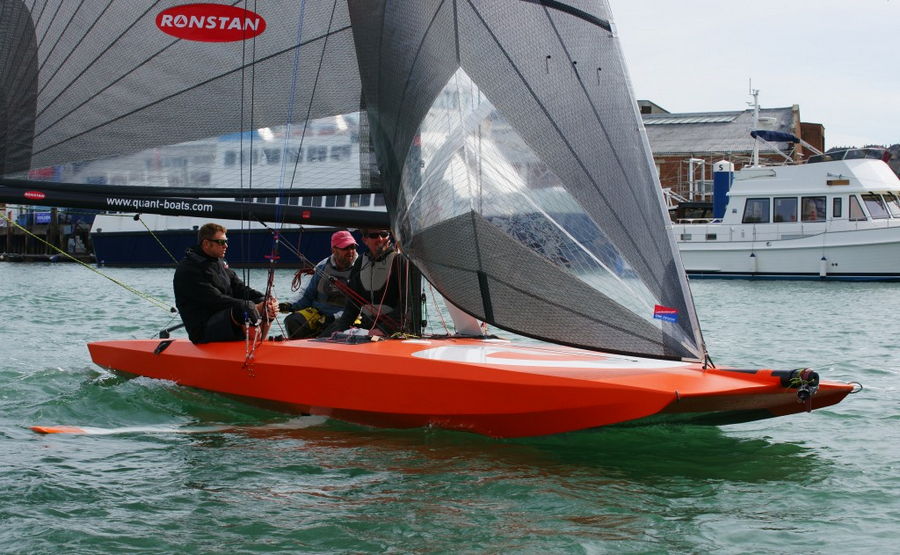 The Quant23 has a low freeboard scow hull. Photo ©: Michael Aeppli / QuantBoats
The Quant23 is the first yacht to have the new foils fitted and is the latest in the range of DSS-equipped sports yachts designed by Hugh Welbourn for QuantBoats, following on from the Swiss company’s Quant28 and Quant30.
QuantBoats’ Michael Aeppli explains: “Today QuantBoats’ team is the most experienced in DSS-equipped yachts. Having spent many hours sailing a DSS yacht, there are lots of other positive side aspects DSS delivers, some of which made me dream of other possibilities for it, such as flying. Those who have sailed the Quant28 could feel that the yacht came close, although this wasn’t what it was designed to do. ‘Flying’ was of course further inspired by the 2013 America’s Cup.” The Quant23’s retractable DSS foil. Photo ©: Michael Aeppli / QuantBoats
Last week in Cowes, Aeppli and Welbourn’s expectations were fulfilled when daylight appeared beneath the hull of the newly launched Quant23 during preliminary sea trials.
While the Quant23 is a foiler (albeit with a fixed keel), Welbourn is at pains to point out that she is otherwise fundamentally different to a Moth or an AC72. While those are grand prix racers, demanding athleticism, great skill and technique to sail, the new yacht does not: “The idea is simply a yacht that anyone can leap into and ten minutes later they’re flying.”
Aeppli confirms this: “With the Quant23 the aim was not to create the world’s fastest foiler, but one of the easiest crafts to fly steadily, providing fun, fast rides, in a wide range of conditions. For us this means that the yacht shall do 90{7ab277620c5331e8b7880e6f86cbb80254c5854d4a7043b2f5807dffb54e9218} of the work and not the crew – mostly this seems to be the other way round with many of the other foiling yachts of today, with complicated systems to manage, understand and maintain all the time.”
Part of the secret lies in the inherent stability of the new DSS foils, compared to that of the inverted T-configuration foils of, for example, a Moth. The new foils, Welbourn maintains, help promote ‘easy foiling’ with the section, aspect ratio and length of the foil promoting early lift-off (i.e. full foiling in the least amount of wind) rather than ultimate top speed, which would require smaller foils with a less powerful section.
“It’s about finding the best balance between things that allows to you to fly three crew plus a yacht with a 60kg bulb, a flying keelyacht. without any great drama,” says Welbourn. He adds that the new generation DSS foil should be scalable, although at the end of the day physics comes into play.
While foiling ability may be the Quant23 sportsyacht’s USP, it also has a futuristic-looking, ultra-low freeboard scow hull – blunt bowed, carrying its hull volume all the way forward and complete with chines and chamfered hull-deck join. The powerful, stable hull shape, Welbourn maintains, prevents the need for racks and such like, making the yacht simple both to build and sail. And you don’t even need to shift crew weight fore and aft to alter the pitch of the foil: “We’ve previously seen that you really don’t have to move around at all actually.”
In terms of her ultimate performance – at present it is too early to say, but Welbourn believes that the Quant23 will be comfortably reaching in the mid-20s. Most impressive is her foiling ability which will see her foiling upwind in as little as 10 knots. “From day one we aimed at having an uphill mode, in not a lot of wind, but that’s another reason why the foils are so big.”
The first Quant23 is a prototype to be used for R&D prior to the yacht going into full production. It is currently undergoing trials in Switzerland.
Daylight appears beneath the prototype Quant23’s hull. Photo ©: Michael Aeppli / QuantBoats