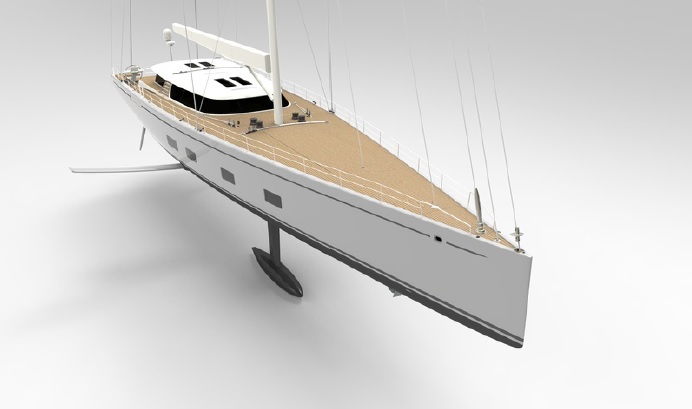 An impressive package of new technology used in Baltic Yachts’ latest carbon composite performance cruising yacht will make her a genuinely remarkable project, underlining the company’s position as the world’s leading builder of super-sailing yachts.
Ground-breaking features
• Performance enhancing Dynamic Stability System (DSS) sliding foil • DSS foil reduces heel and pitching = more comfort • Powerful diesel electric drive train and generating system • Reduction in reliance on hydraulics • Improved serviceability • Self-sustaining power generation while sailing • Easy to handle performance sail plan for short-handed crew • New quadrilateral headsail being considered • Ten hours silent mode with all hotel requirements • Six hours predicted generator run per 24 hours One of the most advanced high performance super-sailing yachts ever built is under construction at Baltic Yachts in Finland and is on schedule for delivery in 2019.
The carbon composite Baltic 142 Custom sloop, designed for fast, comfortable long distance cruising, is equipped with a performance boosting DSS foil which when deployed to leeward creates lift to dramatically reduce heel, increase speed, dampen pitching and enhance comfort.
Velocity prediction figures are indicating anything between a 5 and 20 per cent increase in speed with the foil deployed, depending on conditions.
Key to the entire project has been Baltic Yachts’ unique ability to build a relatively light yacht for her size by using advanced carbon composite technology. At 140 tons lightship the yacht’s displacement is critical to her performance.
America’s Cup technology used for DSS
The Dynamic Stability System (DSS), an athwartships, 29ft 6in (9m) long, moving foil, built into the yacht just below the waterline, has proved highly effective in smaller yachts, but this is the first time it has been used in a superyacht.
America’s Cup technology from Ben Ainslie Racing (BAR Technologies) in Portsmouth UK is being used to help design and engineer the roller bearing and drive systems which enable the foil to deploy under load and extend 22ft (6.3m) to leeward.
Roland Kasslin, Baltic Yachts’ Head of Research and Development said: “The foil will run on four sets of 25 composite roller bearings contained in titanium cassettes. The outboard cassettes will bear the upward load and the inner cassettes the downward load when the foil is deployed.
“In conjunction with Farr Yacht Design and composite engineers Gurit, we have built a slight blister into each side of the hull to increase beam locally and provide a greater distance between the two sets of bearing cassettes to spread the loads more efficiently,” he added.
The design team has invested considerable resource into ensuring the foil is reliable in operation and is completely safe in all conditions.
The foil will be moved using an electric captive winch positioned at deck level. Baltic Yachts is co-ordinating the design and engineering team including naval architects Farr Yacht Design in the USA, composite experts Gurit in the UK, Infiniti Yachts, who developed the DSS technology and ISOTOP Composite in France, who are building the carbon/foam foil. 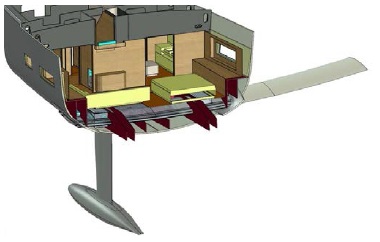 The 9m long Dynamic Stability System foil runs beneath the owner’s cabin just aft of amidships using America’s Cup technology to deploy it.
A new era of efficiency
An interesting consequence of using the DSS foil is the knock-on effect it has on the yacht’s righting moment which in turn affects the amount of ballast the yacht needs and has a bearing on rig design and sail plan. Building the lightweight, easily driven hull in carbon composites ideally suits the system. The Baltic 142 will displace just over 140 tonnes light ship.
Gordon Kay of Infiniti Yachts, whose team has been key in developing the DSS over the past eight years and is working with Baltic Yachts to optimise the 142’s performance, said: “We are in a new era of efficiency – sailing with DSS is about efficiency rather than brute force. This isn’t just about speed but increased stability, reduced heel angles and much less pitching making for a far greater level of comfort.”
He said that in 25 knots of true wind just aft of the beam, the Baltic 142 Custom could reach 25 knots of yacht speed in flat water with about 9° of heel, more than 10° less than a conventional yacht and five knots or so faster.
Other features include a square-top mainsail, an automated running backstay system and two underdeck sail storage drums, one for a Code sail, the other for the staysail. Dutch carbon spar specialist Rondal is providing the mast and rig package.
The 9m long Dynamic Stability System foil runs beneath the owner’s cabin just aft of amidships using America’s Cup technology to deploy it. North Sails is studying an innovative quadrilateral headsail designed with two clews. Its reduced girth measurement in turn reduces drag and the upper clew provides greater trim control.
Fast yacht from Farr Yacht Design
Farr Yacht Design, whose president Patrick Shaughnessy is heading up the naval architecture team, has drawn a yacht with a straight stem and subtly aggressive lines. The Baltic 142 Custom is relatively narrow in the beam, suggesting a fast yacht. With additional stability provided by the DSS sliding foil, ballast weight can be reduced to further enhance performance. She is designed with twin rudders for better handling and to take full advantage of the lifting keel in the up position.
Britton Ward, Farr Yacht Design’s vice president who is also working on the project said: “The predicted performance numbers are remarkable with the yacht able to comfortably achieve yacht speeds equal to the wind speed in moderate to strong winds when reaching.” The Baltic 142 Custom’s extensive, luxury accommodation for the owner and six guests in four cabins has been styled by Lucio Micheletti who, in conjunction with Farr Yacht Design, is also responsible for the outboard look and deck styling including the unusually long, solid bimini which extends over the cockpit. With powered windows, which lower at the touch of a button the cockpit provides an inside-out environment with natural airflow and complete sun protection. The focal point of the accommodation will be the vast deck saloon with panoramic views outboard and direct access into the cockpit areas.
Baltic Yachts break new ground with diesel electric propulsion system
The Baltic 142 Custom, commissioned by an experienced yachtsman who is a repeat client for Baltic, is also breaking new ground for the company with her diesel electric propulsion system which reduces fossil fuel consumption and is considerably quieter than conventional systems.
Because of its high voltage capacity the system can drive equipment like the bow thruster, the rotating stern drive leg and captive winches, reducing the amount of heavy, space hungry hydraulics.
Under power, the Baltic 142 Custom will be driven not by a conventional internal combustion engine, but by a magnet motor directly connected to the propeller leg protruding beneath the hull. A permanent magnet motor uses magnets instead of wound copper bushes and is much more efficient. Because of its small physical size, compared to an induction motor, and high power output, it needs to be water-cooled.
Kim Kolam, responsible for the 142’s diesel electric system said: “The propulsion motor will be powered by six banks of lithium ion batteries which in turn will be charged by two generators. Between them they can produce 420kW, enough to propel the yacht at full power and run all hotel and sail handling requirements simultaneously.” He said that in quiet ship mode – using battery power only while underway – the yacht could run for about six hours at half speed.
To make a system like this possible it operates on what is known as a mid-voltage level of 700volts so that equipment can be run electrically rather than hydraulically. Other advantages include a saving in weight due to smaller cable sizes and reduced noise and vibration. 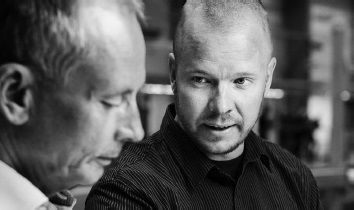 Baltic Yachts’ Head of Research and Development Roland Kasslin discusses the Baltic 142 project with Senior Electrical Engineer Kim Kolam.
Emphasis on ease of service
Henry Hawkins, Baltic Yachts’ CEO, said that in addition to this package of performance enhancing innovation, the new yacht is being designed to be service friendly. “This yacht is equipped with a lifting keel which can be locked in position to take the yacht’s weight so she can sit on her keel safely, use a synchro-lift or dry dock and not have to depend on a crane or a large mobile lift.”
It means that when the yacht is in more remote parts of the world she can use commercial facilities, like fishing fleet docks, rather than have to seek out specialist yachting centres which may be hundreds of miles distant.
In a further move to reduce unscheduled maintenance, the assembly of the diesel electric propulsion system has been contracted out to Visedo, a specialist company headquartered in Finland with a global service network. The Cummins diesel engine element can be serviced almost anywhere in the world and the electric motor or permanent magnet motors and their control systems have been well tried in other fields.
The Baltic 142 Custom is on schedule for delivery in less than two years.
Preliminary Dimensions LOA 43.3m LWL 41.6 Beam 9m Draft, keel up 3.8m Draft, keel down 6.5m Light Displacement 140 tons Ballast 49 tons (fin and bulb) Hull material Carbon pre-preg/Corecell sandwich Fuel 13 400L Water 2000L
Naval architect: Farr Yacht Design Composite engineers: Gurit UK Exterior designer: Farr Yacht Design / Lucio Micheletti Interior designer: Baltic Yachts / Lucio Micheletti Project Manager: Mattia Belleri
For more information contact:
CEO Henry Hawkins henry.hawkins@balticyachts.fi +49 170 226 2651
Sales Director Kenneth Nyfelt Kenneth.nyfelt@balticyachts.fi +350 50 585 8933
Baltic Yachts Oy Ab Ltd • Laukkovägen 1 • FI-68600 Jakobstad • www.balticyachts.fi Tel: +358-6-7819200 • Fax: +358-6-7819260 • VAT NO. FI07843270 • info@balticyachts.fi