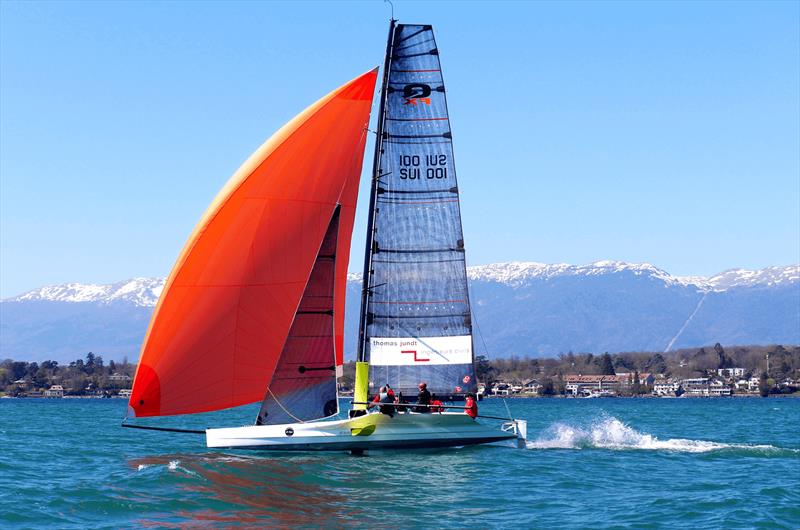 by Ivor Wilkins 19 Aug 21:47 PDT – Swiss engineer Thomas Jundt decided to go all old-school and squeeze in a hull between the rig and foils…

A no-compromise foiling 35ft yacht intended for European lake racing has driven a multinational group of sailors, designers and builders to the extreme edges of technology in a collaboration that has even stretched to what might be termed “positive deception” to achieve its objectives.

Tasked with designing and producing the 14.5m rig, C-Tech’s Tim Willetts says they soon learned that Jundt’s ‘goal was to push us to the point here we were squealing and squirming like stuck pigs’.

With discomfort and life in the red zone, however, comes a certain exhilaration and much earning. As a result, this foray into building a keelyacht mast has enabled the New Zealand company to expand its capabilities to a new level, which is already bearing fruit in the form of new mast orders of similar size.

If Geneva-based Thomas Jundt’s QFX project was an ancient mariner’s chart, it would be represented by the “terra incognito” regions, where dragons and sea monsters roam. High up in Jundt’s written brief is the rare injunction: ‘I do not need any guarantees against breaking’.

Jundt is a soon-to-retire civil engineer, who is well-known in the lake racing scene for his willingness to explore new frontiers. His previous Mirabaud project, for example, tested the notion that foiling yachts could dispense with hulls.

The Mirabaud solution comprised a carbon web of tubular trusses supporting a rig and foils with virtually zero static stability. When it flew, it was very fast, but it depended on a very specific and limited set of conditions to perform. ‘Nevertheless, it is the only yacht to win the Rolle- Geneva race flying all the way and still holds the monohull race record,’ says Jundt.

The QFX project is aimed at creating an all-round lake performer, capable of high performance racing in anything from 0-30kts of wind. The concept is for an extremely light machine with three distinct modes: it must be highly efficient in displacement mode in 5-6kt breezes, which predominate on the lakes; as yacht speed lifts to around 10kts, it would utilise Hugh Welbourn’s DSS technology to semi-foil; and at 15kts, it should fly.

Stability comes from a deep bulb keel and three, possibly four, crew stacked out on trapezes. Jundt’s brief to all the technology partners was to pare back weight to the bare minimum. ‘I am a civil engineer,’ he explains. ‘For 40 years, I have had to build things with wide safety margins. The result is that everything is overbuilt, too big, way too heavy, too much material.’ In contrast, he admires the thinking behind the World War Two Mosquito strike aircraft that was built light in laminated wood, much like a yacht. ‘It was built to a safety factor of 0.8 and when it broke, they repaired it. That is my approach with this project.’

C-Tech’s reputation and expertise is based on its close involvement with skiff sailing, which is hardly the domain of the timid. However, even in an environment accustomed to pushing the limits, there is a sense of tension between genuine admiration for Jundt’s daring ambition and trepidation over its practical implications.

‘A standard engineering approach is for a safety factor of 2.75, Willetts explains. ‘America’s Cup projects operate at about 1.3 to 1.5. Thomas wants to go less than 1.’ Working with Chris Mitchell at Applied Engineering Services and with Doyle Sails New Zealand, whose Sail Pack software provided accurate load cases for the rig, Willetts came up with an initial design weighing in at what he considered a minimal 30kg.

After considerable dialogue – much squealing and squirming – that figure was pared back to 22kg. In that process, both sides applied a certain amount of subterfuge. ‘I told Tim I was reducing the righting moment, so the loads would be less,’ Jundt chuckles. ‘In order not to argue with him, I gave him the wrong righting moment.’

On the other hand, Willetts also snuck in a couple of provisional safety elements in case it transpires that the unsupported topmast section needs some assistance when the 90m2 Code Zero, which generates a luff load of 1,800kg in just five knots of breeze, is inevitably used to go upwind, for example; or an inner forestay is required to balance a deeply reefed mainsail.

Describing some of the challenges in building down to such fine margins, Willetts explains: ‘The mast section is fairly big, which means the wall is only 2mm thick, which raises the risk of buckling.

‘Masts that fail in buckling are tremendously exciting with a great deal of carnage, but buckling is quite hard to accurately model. Avoiding it puts a lot of strain on the laminate and relies on super-accurate construction to achieve the buckling properties required.’ In a facility where precision was already a high priority, this project demanded a further step up throughout the manufacturing process. First up, normal practice would have been to use a standard aluminium mast section as a mandrel. However, off-the-shelf section shapes were considered too flat in the side walls, raising the buckling risk.

Instead, a rounder 200mm section was designed and a custom mandrel built in a mould machined on C-Tech’s new five-axis CNC machine. Throughout the process, from the handling, storage and application of materials, to the temperature and pressure of the autoclave cure, extreme protocols were observed.

‘We took every possible precaution,’ says Willetts. ‘We used ultra-high modulus carbon for a start and then took every possible step to absolutely maximise the known properties of the prepreg and epoxy. We were acutely aware that with zero safety margin even a tiny mistake in the manufacturing process could compromise the mast. Everything had to be as close to 100 per cent as we could make it.’

In the interest of pushing weight boundaries, some of the fittings were custom 3D printed in titanium. Even the normal finishing system was discarded and the mast was just sprayed with black undercoat for UV protection. Similar debates surrounded the boom. Jundt wanted a boom weighing no more than 4kg. C-Tech’s first iteration was at 10kg and the final compromise came out at 6kg.

Despite their “creative differences”, Jundt says he enjoyed working with Willetts. ‘It was great. I sent him an email to say I still think it is too strong, but he did beautiful work and the detailing is fantastic. I was very happy with C-Tech.’

The feeling is mutual. ‘It was a nightmare and a pleasure, which is exactly what you want,’ Willetts says of the project which drove the company to extremes. ‘This kind of project is the most exciting and rewarding part of being a mast maker, by miles. It is gold for what you learn from it.’

Having taken delivery of the mast and boom, Jundt and his crew wasted no time in hitting the water. Without the foils, which will be completed over the winter, they competed in the Centomiglia and Trofeo Goria races on Lake Garda in September, finishing second monohull out of 100 yachts in the first and fourth in the second. The Centomiglia breeze fluctuated from very light to 16kts, while the Goria finished in challenging 30kt conditions.

‘The last 15 minutes or so as we approached the finish line, we were in a bit of a survival mode,’ Jundt says. ‘We were very concentrated. We basically sailed on the jib and left the mainsail flapping, but we were still making 6-7kts upwind. It was manageable. ‘In this condition, we would have been happy to have the DSS system in place. We could have borne away and generated more righting moment.’

Driven by Jundt’s passion, similar creative tensions applied throughout the QFX project. For the hull design, he approached Hugh Welbourn because he admired his Q28 and Q30 DSS monohulls. ‘His hulls are very low drag and I felt he had well understood what was required for lake sailing.’

Having settled on 35ft LOA, the hull design was quite straightforward. ‘Hugh took the Q30 concept, which is fantastic, and extruded it and made some minor modifications. We arrived at the general size and righting moment very quickly. ‘With the foils, though, we had lots of discussion. In the end, I said he should only deliver the hull and deck and we would finish the yacht in Switzerland.’

The issue was Jundt’s insistence that in light air mode, the foil had to retract completely out of the water, which meant the lower exit point had to be above the waterline. ‘The reality is that we will only use the DSS system 20-30 per cent of the time. So, we must be able to sail well for the majority 70-80 per cent of the time and you cannot do that dragging a foil through the water.’

Achieving the geometry and shapes required to achieve the two foiling modes – DSS skimming and full flight – and then being able to fully retract the foil without impeding the rig and the sails above deck took considerable juggling. Once Jundt had designed what he wanted, Welbourn began building the foil.

The strategy is that sailing in medium airs, the foil is deployed to a first stage, which provides the DSS skimming mode. In fresher breezes, the foil is pushed deeper to a second stage, which transforms the foil angle from an L-configuration to a self-regulating full-flight V-shape. For displacement sailing, the foil is pulled up snug against the hull above the waterline and then the top bearing in the deck is designed to slide inboard, leaving the foil shaft leaning against the mast and clear of the sails. ‘It means the yacht can heel to 15° without the foil tip touching the water,’ Jundt explains. ‘It was a no-go, if we could not achieve that.’

Responding to the various sailing modes, the rig arrangement is similarly flexible. Basically, it is a double-spreader fractional rig, with a large mainsail and small jib set back from the stem, with an ability to carry larger headsails on furlers, either in fractional mode above the hounds

and down to the stem, or at the masthead and out to the end of a large prod.

The headsails range in size from 90m2 to 12m2 and the 40m2 mainsail has provision for two reefs. Jundt envisages that in foiling mode, the mainsail will be reefed to the hounds, triangulating with the jib to lower the centre of pressure. Those experiments await the next northern summer when Jundt and his crew look forward to taking off in full flight. ‘We are all in our 60s and have sailed together for many years. At the yacht club we are known as the crazy boys,’ he laughs. ‘Between us, a lot of lake sailing experience has gone into this project.

‘The crew is happy, because with the Mirabaud project we got a bit tired of capsizing and not finishing races,’ says Jundt. ‘Already, the yacht works better than I imagined.’

His only reservation: ‘I think it still could be lighter. It is too strong.’

For more information on C-Tech’s involvement in the QFX Lake Racer: click here